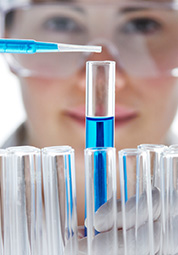 The R&D ability of HPGC has gradually increased over the recent several years, and we have taken 36 provincial and municipal level scientific and technological projects. Two of them are National 863 Projects. In 2008, we undertook state-level research projects like the Specialized Project of Innovative Drugs and Modernization of Chinese Medicines (Siberian Ginseng for Injection) of the National “Ten Five-Year” Key Scientific and Technological Specialized Projects, Innovation Ability Construction Project (the R&D Innovation Specialized Project of Eukaryotic Recombinant Proteins) from the National Technology Center, and a specialized study (Strategic Study of Patents of Antibiotics) from the State Intellectual Property Office.

Our Chinese medicine for injection preparation is domestically pioneered, and its technology level is world-leading.

HPGC was the first to have developed antibiotic API technology in China, and the main technology indexes are critically improving thanks to continued technology improvement and new technology application.

After employing new bacteria strain, membrane filtration and “Three in One” technology, our penicillin yield has greatly increased and the technology indexes have stayed in the national leading place.

Our production technologies of cephazolin sodium and amoxicillin sodium are internal advanced level, and the technology indexes are national leading level.